Fitting the Worktops and Flooring

Follow us as we take a journey following our own new kitchen installation from start to finish, giving you a bird’s eye view of the kitchen design and fitting process.

Once all the units were in I was very excited to get my kitchen worktops fitted. Stone Circle were extremely efficient and the worktops were fitted expertly and in no time at all. A team of two coped admirably with the task.

When choosing the worktops as I mentioned before it was very hard to settle on the colour and pattern. I didn’t want a really dark effect but didn’t want white either so a light background with greys and browns was perfect for us. This choice was perfect they complimented the cupboard doors, lightened the units that were in the Graphite grey and the overall look was just what I hoped it would be.

It is fascinating watching the fitters, the sink run comprising of the worktop around the hob, the sink and drainer were all one piece, the peninsular next to that was a piece on its own, as was the area above the TV and the worktop around and over the 2 ovens. We also had upstands fitted, plugs cut out and then they sealed the whole thing. We were especially happy with the joints which are unnoticeable, so all in all a very good job. 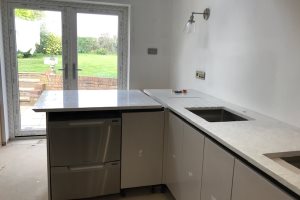 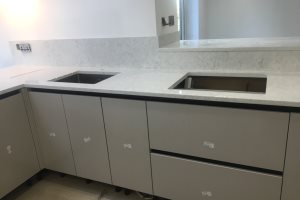 The flooring was a little more difficult for Steve at Flooring & ceramics and his fitters as there was a dip in the middle of the new kitchen area where some previous owners had added the extension and the join wasn’t brilliant. He had to come and level out the floor which involved latexing over the whole floor but on the uneven part it had to be done in 2 stages with a granular compound mixed with latex. All this had to have time to dry and we couldn’t walk on it for a number of hours. This was quite a challenging time as it meant going out through the front door and round the side of the house to get in to the utility room every time we wanted a cup of tea!!!

A few days later Steve returned with our choice of Karndean tiles and they were done and dusted in a day. 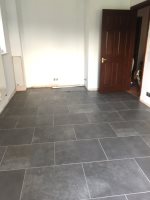 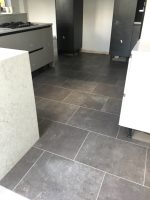 I think they look really beautiful and compliment the worktops and units so all in all a really good choice. They are also quite forgiving so with a dog and plenty of rain in England they will be really easy to keep looking clean.